Though exciting, finding the right way to tackle this project has been tough! But I’m taking it in chunks.

As always, Trello is my organization go to! This is my Spark board, with the in-the-works outline, the next steps, the animation to-dos, and what I’ve done so far. (…I promise I actually have done more than that.)

As it goes, for a project like this there is always things to learn and research to be done! And especially for this one, since there are things that I will be covering in the video/animation that I myself don’t fully understand. :D

Here’s some of the basic information I’ve learned so far.

The word electricity is used in so many different ways that I am going to avoid using it as much as possible, though that is the thing I will be attempting to teach. Electricity has many connotations, many different meanings, and is all around confusing when you use it repeatedly to describe contrasting ideas.

I assume that the reader understands the basic model of an atom and has a foundation of  Work and Energy concepts. This is the generic highschool definition of voltage, which is about halfway accurate. I’m saving the calculus definition for another blog post by itself.

Disclaimer: Though I mention and talk about V = IR, I will not cover resistance.

Charge. In the physics world, Charge is a physical property of matter, similar to how plants have different chemical properties. Particles and matter have the charge property, like the lavender plant has the calming property*, or how matter can also have properties such as mass, temperature, and more.

Of course plants are on a much larger scale than the particles in question, but the analogy still stands.

Since the charge of 1 electron is just a fraction of 1 Coulomb, how many electrons would it take to equal 1 Coulomb total?

Protons and electrons are so tiny that it takes trillions of them to equal 1 Coulomb of measurement, as seen above.

In the topic of electricity, we often hear of terms such as current, voltage, and resistance. All three of these terms make up a very important equation we call Ohm’s Law.

For you non-equational folk, have no fear. I will do my best to explain without mathematics.

Because we know about charge, we can start using our knowledge to flesh out more of these concepts. Lets start with I, Current.

Current is the measurement of how many Coulombs (or charge) is running past a certain point every second. When we look at the unit of Current, it is:

Remember how many electrons are in one coulomb? If we had a Current that was 1 Coulomb per Second (1C/s). That would equal 6.241509 x 10^18 Electrons / Second (I just replace 1 Coulomb with the amount of electrons it is equal to), which is a lot of charge! 2 Coulombs per second would double that electron amount, which means more charge is flowing.

Current is measured in Amperes, so we can replace current in the unit equation with:

Amperes is always equal to Coulomb / Second, so if we have 20 Amperes, we have 20 Coulombs / Second. 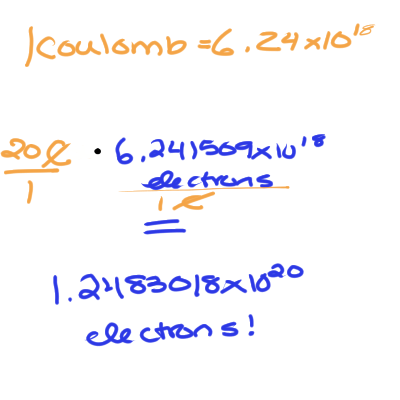 Let’s make sure we remember what we’ve covered so far.

Charge is a property of matter, and it’s measured in Coulombs. 1 Coulomb is equal to a lot of electrons.

Current is the amount of charge moving past a certain point each second, measured in Amperes.

Now, to understand what Voltage really is, we need to examine more about the side effects of charge.

See how these electron’s electric fields surround them, and repel each other? That mass of blue in the middle shows they can’t grow any closer. The force lines (with arrows) show where the electrons will go if the two are pushed any closer.

Same with these protons: 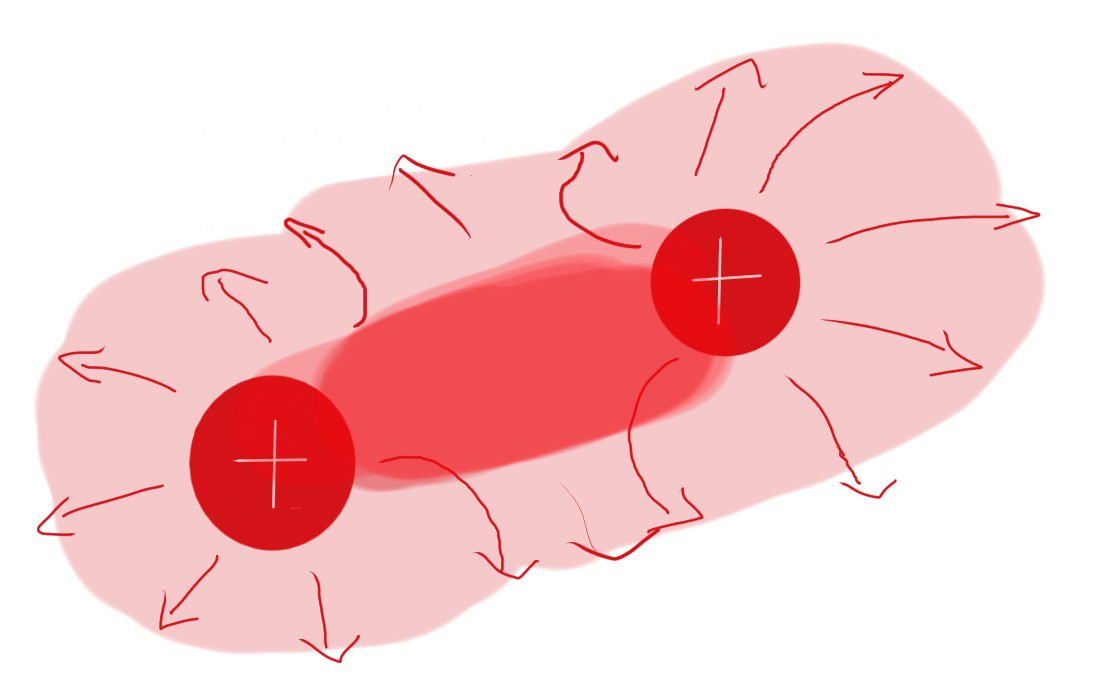 Like charges repel. Because of the electric fields around them, they cannot grow any closer. Therefore, their force is pointed away in the other direction.

But if you have a proton and an electron: 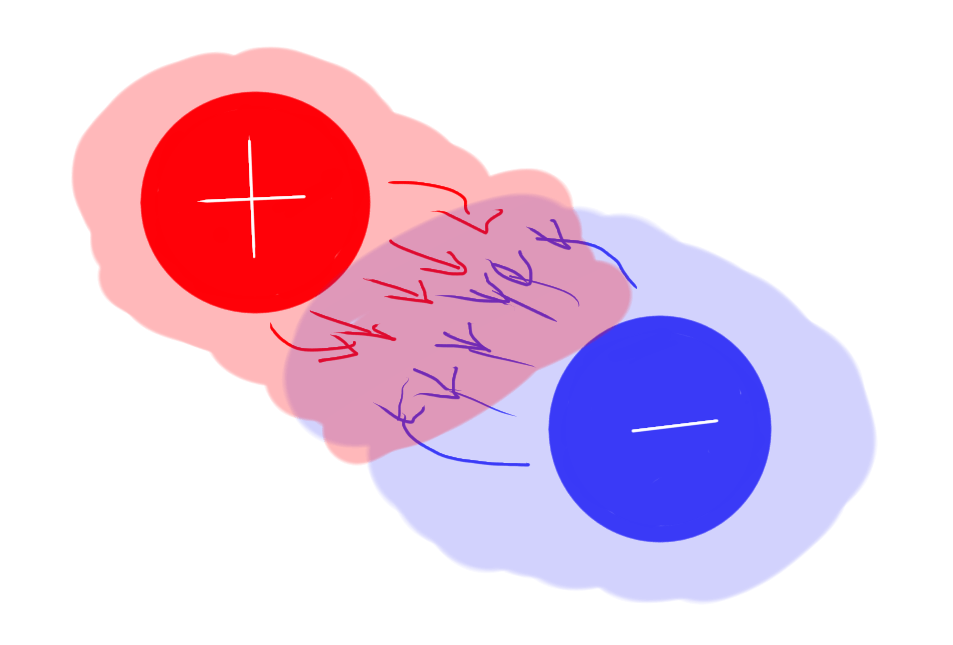 An electric field is like a bubble that exerts a force on other charges to attract or repel them.

If we had a stationary charge, a proton, like this one:

And we added another proton into the mix, what would happen to it, if this one (above) stayed stationary? 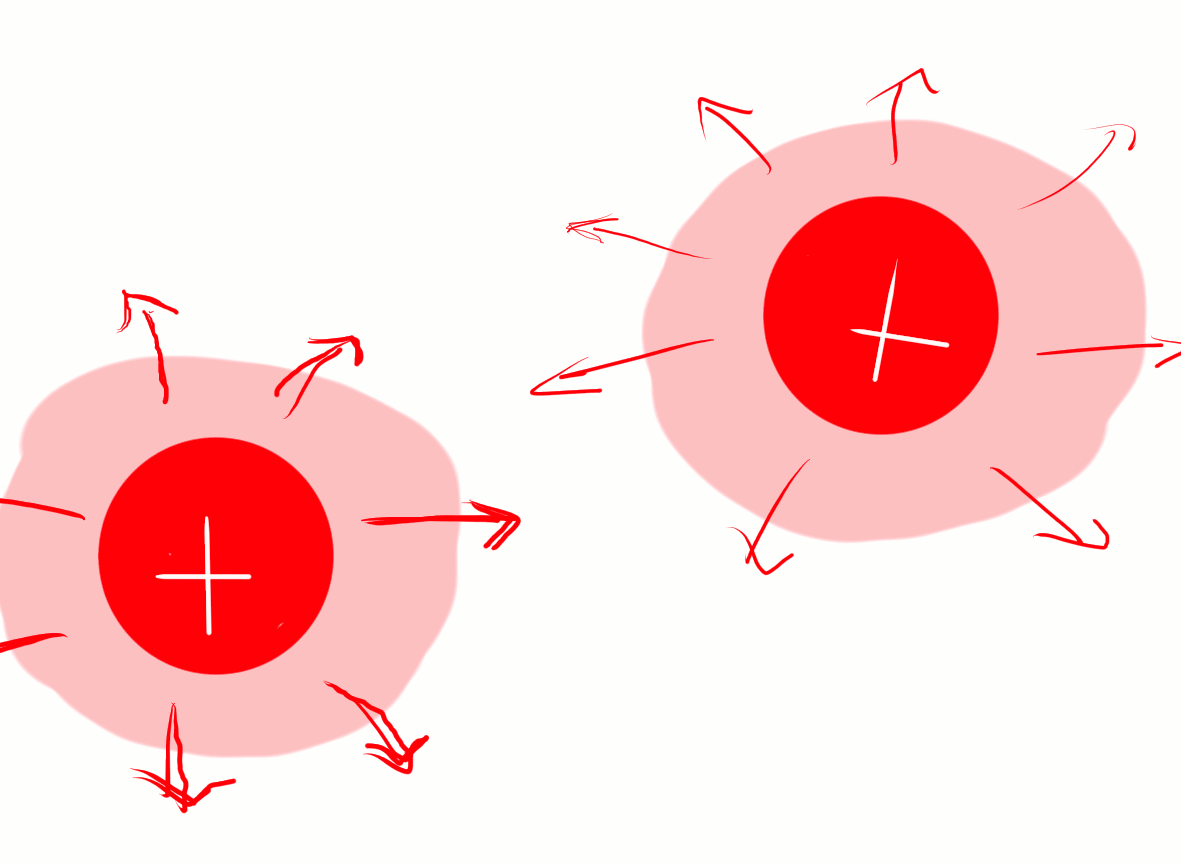 The added proton, wherever placed, would be repelled in the direction the arrows were pointing, because the protons repel each other.

See how the added proton is forced towards the stationary one, but is repelled because the electric fields can only get so close?

(pardon my GIF making…it’s the first one I ever tried!)[/caption]

If we kept the original proton stationary and added an electron, they would accelerate towards each other due to the attractive force of their fields.

These electric fields play a huge part in explaining what Voltage is.

Electric fields, as I said earlier, exert a force on other charged particles. This force is measured in Newtons. These forces can react in three different ways: repelling forces that can be overcome (a proton moving over a repelling group of like charges), attractive forces will come together (proton + electron), and repelling forces that are too strong are pushed away (simply repelling).

If you remember in chemistry and physics, A Newton*meter is the unit for a Joule. This means we can simplify Nm/C to simply be J/C. But what does that actually represent?

Taking this definition, we can define what instantaneous electric potential is ourselves.

Instantaneous electric potential is the amount of Joules–the energy to move charges over a distance–per Coulomb of charge–that huge number of electrons–over a distance (this distance is often the opposite force exerted by the electric fields the new charge must overcome).

Keep in mind, this is only instantaneous electric potential (instantaneous Voltage), and charges are moving all the time! So this isn’t wholly useful, yet.

Voltage is accurately described as electric potential difference, and this is only slightly different from instantaneous voltage.

If we have a group of charges:

And little Mr. Electron wants to get past them:

The force he needs to get around these guys at the beginning point (lets call it point A):

Is much larger than the force he needs to move once he’s gotten past them:

Because this battery is 3 Volts, that is the amount of Joules per Coulomb needed to move the protons and electrons through this circuit. (3 J / 1 C = 3V) There are no obstructions for the charges to overcome, so the current (charge per second!) is constant.

Another real world example can be had with a common circuit component: Capacitors!

Capacitors are cool little nuggets. To put it simply, capacitors store charge. They have two metal plates on the inside, and the plates are separated by an insulator (material that does not conduct charge).

One of the leads is connected to the electron flow, and the other is connected to the proton flow. The metal plates begin to collect charge, but the charge can never meet in the middle due to the insulator. Therefore, a ton of positive and negative charge is built up on each plate, creating one massive electric field equal to the net charge of each individual electric field.

This electric field becomes an obstruction for charge to go past, which adds to the difference in electric potential magnitude. More Joules are needed to move the same number of Coulombs past the big electric field, which means a higher voltage is needed.

Voltage is an extremely confusing subject if you don’t have a good understanding of the foundational principles of charge, energy, and work. But with a little thinking, it’s an incredible subject to be able to understand.

P.S. There will be a follow up post sometime soon with a visual on the calculus definition of voltage.